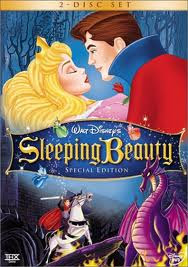 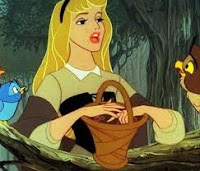 Princess Aurora: Voiced by Mary Costa.  Aurora (also known as Briar Rose when she is being hidden by the three fairies) has a little more personality than most Disney Princesses from this era, but not much.  She is fairly spirited and whatnot, but mostly is just pleasant and dreams about finding true love. 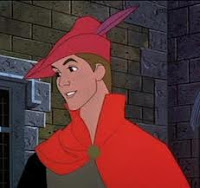 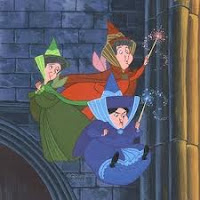 Prince Phillip: Voiced by Bill Shirley.  Prince Phillip has loads of personality.  In fact, he’s the first Disney Prince to not only have an actual name, but a personality at all.  He’s funny, strong-willed, romantic… *sigh*.  He’s also drawn very nicely.  I would like to make him real.

The Three Fairies: Flora, Fauna and Merryweather: Voiced by Verna Felton, Barbara Jo Allen and Barbara Luddy, respectively.  They are the guardians of Princess Aurora.  They give her the gift of beauty and song, and… sleep?  Trust me, it makes sense.  Flora and Merryweather fight like woah, and Fauna is just in her own little world.  Love.

Maleficent: Voiced by Eleanor Audley.  Maleficent is the villain, and what a villain she is.  She’s elegant, well-spoken, and scary as hell.  Plus?  She turns into a fucking dragon at the end.  We never know what her motivation is, and we don’t care, because she is awesome.

Seriously, y’all, if you don’t know what Sleeping Beauty is about… yeesh.

OK, so we start with the celebration of the much-anticipated birth of King Stephan and the Queen’s (Leah?) daughter, Aurora.  The three fairies show up to bestow gifts upon her: Flora gives her the gift of beauty, Fauna the gift of song, and Merryweather…. gets interrupted by the entrance of one pissed off Maleficent.

Turns out Maleficent wasn’t invited to the shindig.  So, she curses with the prophecy that before the sun sets on her sixteenth birthday, she will prick her finger on the spindle of a spinning wheel and die.  That’s a bit harsh for not being invited to a birth celebration.  There’s probably more to it, but it’s never explained.  Again, we don’t really care because Maleficent is crazy awesome.

After she curses the Princess, she peaces out in true villain fashion, leaving the King and Queen quite distraught.  They ask the fairies if there’s anything they can do, but their magic isn’t strong enough to counteract Maleficent’s.  But they can make an adjustment.  Merryweather still have one gift left.  She changes the curse so that instead of death, she will fall into a deep sleep until true love’s kiss awakens her.

King Stephan wastes no time in having all of the spinning wheels in the kingdom burned, but even that isn’t enough.  The fairies deliberate, and decide the best thing to do is to take baby Aurora and hide her in a cottage in the woods until her sixteenth birthday.  They sneak her out in the dead of night.

Meanwhile, Briar Rose has grown up to be a beautiful young woman, with a beautiful voice.  When those fairies give gifts, they don’t mess around!  She is all pleasant and dreamy as she wonders if she will ever meet a man.

The fairies, disguised as peasant women, are planning a surprise party for Briar Rose, so they send her out to pick berries.  While she’s gone, Flora decides that she’s going to make a dress, Fauna will make a cake, and Merryweather will be the dress dummy.  And they have to do it all without magic.  This should be good…

Prince Phillip is out for a ride in the woods and hears singing to herself.  He in enchanted by her voice, and sets out to find her.  He gets knocked off of his hose, Samson.  His interactions with his horse are pretty funny.

So, is singing “Once Upon a Dream” to the forest animals (of course she is) and Prince Phillip winds up cutting in.  They fall in love on sight, but she’s not allowed to talk to strangers or reveal any information about herself, so she runs off.

Meanwhile, the fairies are not doing so well with their non-magical birthday prep.  The cake is a disaster, and the dress… well… Yeah. 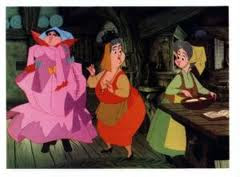 Fed up with this nonsense, Merryweather gets the wands and they go to work.  Flora gets to the dress, Fauna makes the cake, and this time Merryweather is on clean up duty.  Poor Merryweather.  She always gets the short end of the stick…

All’s well, until Merryweather and Flora fight over the color of the dress.  Their magic colour streams shoot up through the chimney and are spotted by the raven.  Uh-oh…

arrives home, and is told that she’s a Princess, betrothed to a Prince (who is actually Prince Phillip, but she doesn’t know that, and they don’t know that she met him).  She doesn’t take the news well, and goes to cry in her room.  Typical teenager.

Back to the actual story… is taken to the castle, but Phillip shows up to the cottage after they left to be kidnapped by Maleficent.

The fairies sneak into the castle just before sunset so they can get her ready to be presented.  She’s all moody teenager on them, so they leave her alone for a minute.  Stupid fairies!  It’s not sunset yet!

Maleficent lures to some tower in the castle and she pricks the spindle.  Ah, the best-laid plans.  As the sun sets, the fairies find in a deep sleep.  They put her in her bed, and decide to put the entire Kingdom to sleep.  Makes sense.

Maleficent decides to pay Prince Phillip a little visit.  She tells him that she is going to keep him there for a hundred years before she lets him go awaken with his kiss.  Seriously, woman.  I don’t understand your motive here.  But again, it really doesn’t matter, because you are awesome.

The fairies show up to help Prince Phillip break out of the castle, and what follows is the best climax Disney has ever done.  The fairies turn the raven to stone, help him escape, Maleficent raises thorns around King Stephan’s castle, and when he breaks through those, she transforms into this: 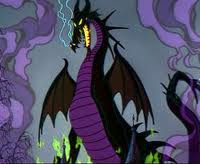 Just before the transformation, she says “Now you shall deal with me, oh Prince!  And all the powers of Hell!”  I had a story book of this when I was a kid, and they changed the line from “powers to Hell” to “Powers of evil”.  Totally not as effective.

The Prince slays the dragon, kisses the girl, and they all live happily ever after.

So, why do I love this movie so much?  It was the last of the great fairy tales until The Little Mermaid, and it took them almost ten years to get it from idea to screen.  It is such a unique and special movie.

The art direction is amazing.  It is based on classical artists.  The only film that comes close stylistically is Pocahontas.  The colours are vibrant, the characters drawn perfectly.  is stunning, but believable as a sixteen year old, Prince Phillip not only has a personality, but he is gorgeous.  The fairies all have their own unique looks to go with their personalities, as well as colours – Flora is red/pink, Fauna is green, and Merryweather is blue.

The music.  Of course.  The music is almost entirely taken from Tchaikovsky’s Sleeping Beauty Ballet, albeit rearranged.  Some is taken from other classical pieces, and anything original to the film fits right in.  It is beautiful, and used well here.

Maleficent.  Best villain ever.  Eleanor Audley also voiced the evil stepmother from Cinderella, and is Madame Leona on the ride.  She is terrific.  Her motives aren’t really stated, and her revenge does seem to be a bit much for not being invited to a party, but she is just so amazing, it doesn’t matter.  Also?  FREAKING DRAGON.

This movie is a reminder that animated does not have to be silly.  It does not have to be directed strictly to children.  It is an art form, and can appeal to people of all ages.  This movie captivated me as a child, and there is only a small amount of slapsticky humor when the fairies are trying to make ’s party without magic.  It is a smart, beautiful film.

That’s a wrap!  Tomorrow: another Princess…
Posted by BethieJean at 7:38 AM