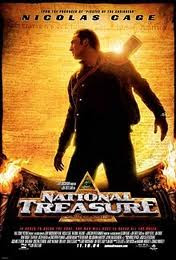 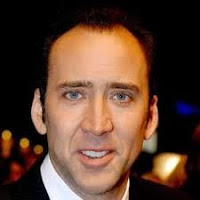 Benjamin Gates: Played by Nicholas Cage.  Ben is an historian/treasure hunter.  He’s a wee bit obsessive, and more than a wee bit nuts sometimes, so really it’s Nic Cage being Nic Cage.  And being awesome at it.  Ben is also a little pretentious and arrogant when it comes to his history knowledge.  Which makes him kinda sexy, too… 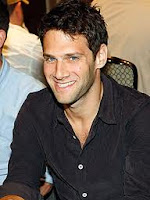 Riley Poole: Played by Justin Bartha.  Riley is Ben’s assistant/wise-cracking sidekick.  He is every nerdy girl’s dreamboat.  He’s not so much into the historical end of things, but the technical side.  He trusts Ben implicitly, and is snarky to boot.  Love. 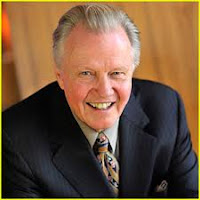 Abigail Chase: Played by Diane Kruger.  So many pretty people in this movie… anyway, Abigail is a curator at the National Archives and gets sucked into the treasure hunt while she tries to protect the Declaration of Independence.  She is the romantic interest for Ben.

Patrick Gates: Played by Jon Voight.  He’s Ben’s father who is the family grump.  He is totally against hunting for the treasure, but gets sucked into it by association with his crazed son.  He’s often the voice of reason, but since reason has no place in this movie, he gets shut down a lot. 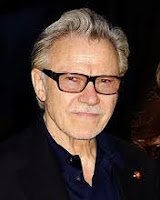 Ian Howe: Played by Sean Bean.  Ian starts out ok, (funding the treasure hunt and all), but he really wants his piece of the treasure pie, so when he suggests they “borrow” the Declaration of Independence because there’s a map on the back, and Ben won’t let him, he takes his toys and goes on his own treasure hunt.  Because you can’t have a treasure hunt without some asshole competing with you.

: Played by Harvey Keitel.  is the FBI agent who is assigned to getting the Declaration of Independence back after it’s been “borrowed”.  There seems to be more to him than initially thought, and he turns out to be a pretty groovy dude. 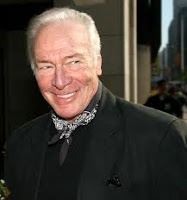 John Gates: Played by Christopher Plummer.  He’s Ben’s grandfather, and tells him the story of the treasure, leading him on his lifelong quest.  A small but important role, played by Captain Von Trapp himself.

OK, so the rundown?  There’s this treasure to end all treasures, Knights Templar, too big for just one man, blah, blah, blah.  Somehow, it wound up in the North American colonies, and the founders hid it and devised a series of clues.  The last clue (really, the first clue if you think about it) wound up in the hands of a stable boy named Thomas Gates.  This is the big family heritage, and apparently a lot of people lost a lot of money and good name searching for this treasure.

Ben wants to find the treasure.  Not for monetary value, but to prove his family isn’t crazy.  Also, for the historical significance, which, again: sexy.  So, the clue is “The secret lies with ”, and after a lifetime of searching, Ben discovers that “” is actually a ship.  They find the ship (buried in ice in the arctic) and on the ship is a pipe that leads them to the next big clue: there is a map on the back of the Declaration of Independence.

OK, see how many times I have typed out Declaration of Independence so far?  That is nothing compared to how often they say it in this movie.  There’s a drinking game.  You will die.

So, Ian decides he will steal the Declaration of Independence (drink!) because obviously no one will let them look at it because they’re all nuts.  Ben can’t allow that, so Ian winds up blowing up the ship.  My little historian heart wept a little.

So, Ben realizes that Ian will steal the document with or without him, so he decides to try and stop him.  When alerting everyone in doesn’t help, he goes to the National Archives, figuring someone’s passion for historical documents will be an asset.

There he meets Abigail, who is gorgeous, loves history (she has ’s campaign buttons, save for one.  WANT!) and is a little snarky.  I not only have a huge girl-crush on her, but I kinda want to be her when I grow up…

So, there’s this gala for the National Archives, and Ben explains his elaborate plot to steal the document during the gala.  It’s pretty badass, and smart, and I love it.  But Ian’s there, too, and he’s more of a “smash and grab” thief.  Oh, Ian, these things are always won with brains.  You already lost, dude.  Also, after you blew up The Charlotte, I would not trust you within fifty feet of any historical artifact.  Asshole.

And we’re off to the races!  They follow the clues they find (with a little help from Ben’s dad), while being followed by Ian and his band of history-haters and the FBI.  They wind up momentarily working with Ian when all hell breaks loose in Philly, and wind up in NYC.

Ian has taken Patrick hostage, and they all go down under to hopefully, finally find this damn treasure.  But once they get to the bottom of this insane hole, all that’s there is an empty room with a lantern.  Ben and Patrick, being all smart, give Ian a fake clue sending him off to , and Ian falls for it because he is stupid.

Of course, they eventually find the treasure (the pipe they found waaayyy back on the dearly departed comes into play, which I actually love) and it is damn impressive.  Ben strikes a deal with the FBI and gives them Ian to toss in jail so he doesn’t have to go.  Ben and Abigail get together, Riley gets a fancy new car he doesn’t know how to drive, and we all anxiously await the sequel.  Unfortunately, we get one…

So, I majored in US History.  I should really hate this movie, because while some of the history is well-done, so much of it is inaccurate or just plain made up.  But… it’s so much fun!  And it shows how exciting and fun history can be!  Which is important.  And treasure hunt movies are always fun.  Unless it’s The Treasure of the Sierra Madre, which is just depressing.

When I was in college, I was an active member in the History Club on campus.  This movie somehow became our unofficial History Club movie.  When we went on a trip to , we referenced the hell out of it.  When we got back, we watched this at a meeting, and I turned to everyone and said “Oh my God, I am so sorry!”  They looked at me funny, and I went on to say “I am so Nic Cage in this movie!”  This was met with a bunch of head nods and a collective “yup!”   So, I know why I love his character.  He is just so into the history of everything, and gets excited and shares that, which comes off a little “know-it-all”.  So, I relate to him a lot.

If you are a “serious historian”, A: why are you reading this blog? and B: avoid this movie at all costs.  If you just have a passion for the field, treasure hunts, and intellectual pretty people, check it out.  It’s a harmless and educational way to spend two hours.  Just make sure you look up some of the stuff before you buy into everything – like I said, some stuff is just not real.  But it makes for a great story, so who cares?

That’s a wrap!  Up next: get out the hankies.
Posted by BethieJean at 8:38 AM