#342: The Emperor’s New Groove (2000).  I told y’all they aren’t all classics!  Actually, this is one of my favourite Disney’s, and I think it is completely underrated and a classic in its own right.  But that’s just me… 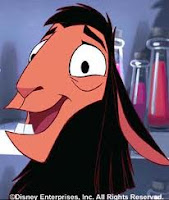 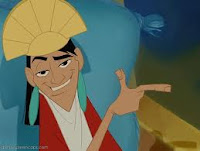 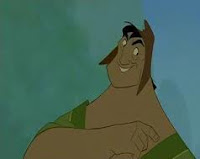 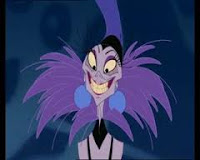 Kuzco: Voiced by David Spade.  He’s a spoiled ruler who wants to destroy a home to make way for his fancy vacation home and gets turned into a llama.  See?  You love this movie already!

Pacha: Voiced by John Goodman.  He’s a farmer whose house is in jeopardy of being destroyed and turned into Kuzco’s vacation home.  He has a snarky wife and a couple of kids, with another on the way. 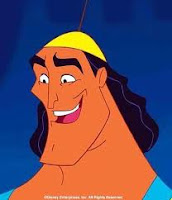 Yzma: Voiced by the delightful Eartha Kitt.  She’s a sorceress (?) and one of Kuzco’s advisors.  Also eeeeeviiiil.  She tries to kill Kuzco so she can be in charge of the kingdom, but the potions got mixed up and she turns him into a llama.

Kronk: Voiced by Patrick Warburton.  Kronk is dumb as rocks, and probably the best thing about this movie.  He is hilarious.  He’s Yzma’s sidekick, but struggles with doing the right thing.

Kuzco is a spoiled brat who rules a little South American kingdom.  He treats his subjects with disdain, and only cares about his best interests.  Suffice it to say, he is not what one would call a beloved ruler.

Pacha comes to see him, and he tells him that he plans on demolishing his house to make way for a vacation home.  It’s the prettiest spot in the kingdom, apparently.  Blah, blah, blah-you’re evicted, Kuzco is a jerk.

Yzma plots to kill Kuzco and at dinner with him turns him into a llama because he fired her.  Kronk messed up.  So, she decides to throw him in the river.  But Kronk’s conscience and stupidity get the better of him, and he winds up dumping Kuzco in Pacha’s wagon as Pacha sadly makes his way home.

Upon discovering that Kuzco is not a demon llama, but an enchanted one, he determines that he needs to get him back to his palace.  But not before begging him to reconsider the vacation home.  After some snark, Kuzco heads out by himself.  Inevitably, he winds up cold, alone and miserable.  He has an incident with some creatures in the forest, and Pacha saves him!  Cue the buddy pic!

Basically, they have to get him back to the palace because Yzma is going to ruin the kingdom if she rules it, and Yzma and Kronk are also out to get them.  Their paths cross in a hilarious scene in a diner, and then the race is really on.  There’s a “battle” of sorts, reminiscent of the wizard duel between Mad Madam Mim and Merlin in The Sword in the Stone, where Kuzco and Yzma keep drinking potions in the hopes to either turn human or destroy each other.  Kuzco goes through a few animals, drinks the llama potion, and says my favourite line ever: “Yay, I’m a llama again!”, followed by his face falling.  You really have to see it to get it… Oh, here…

So, eventually Kuzco turns human again, Yzma gets turned permanently into a helpless kitten, Kronk runs the local chipmunks troop, and Pacha gets to keep his house.  Kuzco still gets his vacation home, just on the hilltop next to Pacha’s house, and learns some very important lessons.  The end.

So, this was a tough one for me to recap for y’all for some reason, probably because there really isn’t much too it.  It’s a road trip buddy picture which is, plot wise, thoroughly predictable.  There’s no songs, save for the opening and closing number, and it moves along at a pretty good clip.  I also usually have the movie on while I write, at least for inspiration, but for some reason, I couldn’t find the time to do so this week, so… yeah, not my finest work here.  Apologies to all!

So, why is this movie listed as my one of my all-time faves?  It is “experimental” Disney that worked.  Not a lot of people appreciate this movie, but I think it is a great step out of the box for them.  At this point, Pixar was starting to rule the animation department, and the fairy tale style was starting to slip.  Then there was this weird little movie that helped pave the way for something like Lilo and Stitch.  For that, I am ever thankful.

It’s funny – it has a lot of great one-liners that my friend Val and I randomly quote to each other all the time.  Out of context, they make no sense whatsoever, but we think they’re hilarious.

I also do have a bit of a personal attachment to this one – it was one of the first movies I saw when I moved to , and it’s one of the movies I bonded with my friend Val over.  So, there is that, too.

But overall, it’s just a fun movie that moves along at a great pace.  David Spade and John Goodman play off of each other beautifully, Eartha Kitt is brilliant, and Patrick Warburton is perfection as Kronk.  Who, by the way, was the one who got the spin-off.

Stylistically, it’s unique and interesting to look at, the uses of colour and shape are really great.  And musically?  Well, like I said, there’s only one song at the beginning and then reprised at the end.  But it’s sung by Tom Jones.  Yeah, that Tom Jones.  Awesome.
I say, if you haven’t seen this one, check it out.  It’s a harmless movie, and a lot of fun.

That’s a wrap!  Up next: another “Val and Bethie” movie!
Posted by BethieJean at 7:54 AM